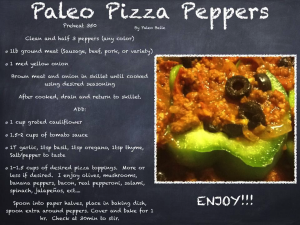 Guest writer, Elissa, shares her favorite Paleo pizza creation with us. Thanks Elissa – we can’t wait to try this one!

When beginning with Paleo I was overwhelmed.  What was I to do with all the new information I have learned with the new cooking staples in my pantry?  These things I had not experience with, could I even call them staples?  I knew I had a task laid before me if I were to survive this much needed lifestyle transformation.

I will be the first to admit, I don’t follow rules and directions well.  Unlike my mother who strict follows every recipe down to the last granule, I cool and bake with my gut.  Recipes are simply for time, temp, and ingredient suggestions that you can take or leave.  When I am creating something delicious there is a thing that happen inside of me, something magical turns on and more often than not the thing that results is a culinary delight.

PIZZA……who doesn’t love PIZZA?!  A favorite American treat loved by many from the time they could ingest until the time they can do so no longer.  Pizza…..one of the very first things I knew I was going to have to get down right, there was no way I could or wanted to go without it.

When it came to creating the delicious I knew I was going to have to dissect the recipe full of wheat and dairy to determine what exactly is was that made pizza so desirable.

Crust:  Even as a child, I never had much use for the stuff.  It was just like a plate for the gooey goodness.  Who eats the plate?

Cheese:  Oh cheese how I loved thee, but cheese in all of its gooey glory was in NO WAY worth the grumbling in my tummy (insert vision of Winnie the Pooh).

Things of Importance:  Meat, vegetables, and the amazing sauce with its desirable seasoning.

What was a girl to do?  I had absolutely no desire to Paleoize (to make a food dish that is in no way Paleo include Paleo ingredients; these are often high in natural sugars, nuts, and starches), resembled a crust. I try to steer clear of Paleoizing anything, to me, often takes away the deliciousness and nutritious things Paleo offers.  There had to be a simple way, some sort a vessel.

As I stared blankly into my fridge searching for an answer, there is stood in its green glory!  A green pepper!  Of course it made sense, so simple, a green pepper with bowl potential.  Not a new theory, stuffed peppers have been around for decades!  All of the AMAZING pizza toppings stuffed inside of a common topping itself.  No wheat or dairy and nothing was Paleoized in the creation.  Simple ingredients, combined. 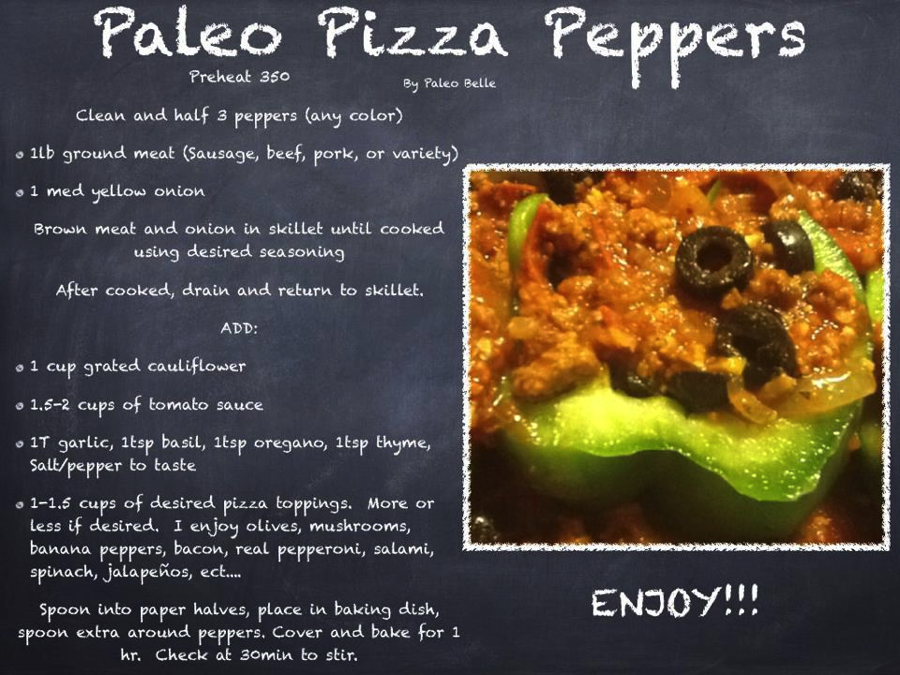 cheesy note:  Cheese.  For me it was nearly impossible to give up completely.  But I simply refused to allow non-food, man-made chemicals to enter my clean body.  I went on a hunt for a treat in hopes of what I found didn’t cause any digestive distress.  On my hunt I found raw cheddar cheese.  Cheese with no unnatural ingredients made out of raw, unpasteurized milk.  I gave it a whirl and to my surprise there was NO digestive issues!  Now from time to time when I stray the non-dairy path I indulge in raw cheeses from cows, sheep, or goats. 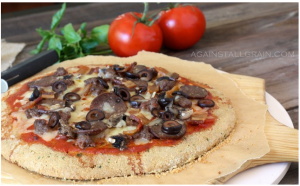 Pizza nights are back!

Danielle of Against All Grain has done it again!

This time she has come up with a grain free pizza crust that claims to be delicious, and to hold up against its gluten and grain-full competitors, unlike some of the other grain free crusts we’ve tried which don’t allow you to pick up and indulge in a little slice of pizza heaven.

She tops her with some of the delicious and healthy meats from US Wellness Meats, though we left the toppings up to you on this one, so go ahead and indulge in your favorites. Some of ours include goat cheese, spinach, garlic and tomatoes.  Another fave is sauce, ham and pineapple.  And yet another is the meat lovers favorite with proscioutto, sausage, ground beef and jalapeno.

Truth be told, top it with whatever fresh and delish toppings you want and simply enjoy the ability of savoring pizza again on a grain free diet! 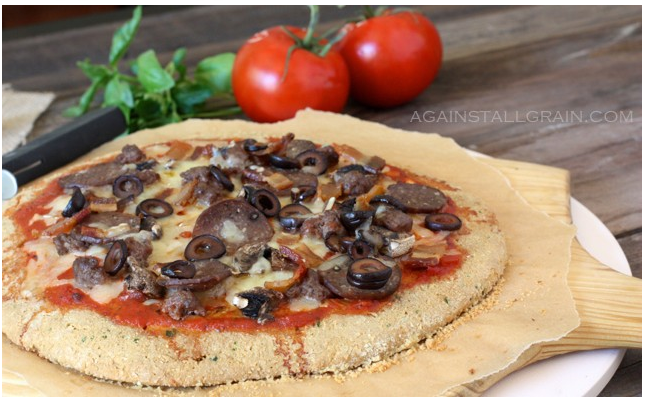 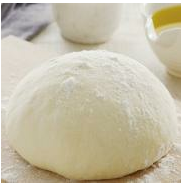 NYC pizza – a little slice of heaven.  A part of my past? Perhaps, but pizza doesn’t have to be!

If you’re lucky enough to live in some of the more progressive cities where you can walk into a Pizza restuarant and ask for a gluten free pie, then you can rpobably pick up a frozen GF pie in your local supermarket too, but for those of you who aren’t as lucky (and who miss the tasty pleasure of pizza) you can always whip up your own dough at home. While I can’t personally eat pizza dough due to following a grain free diet, I have had several people tell me this recipe is a keeper!

I’ve also posted an alternate grain free pizza dough recipe which we love, but it doesn’t have the consistency of a traditional pizza pie and you can’t pick it up. I did list some yummy topping ideas though, so you can head over to this post if you’d like some inspiration for a delish hawaiian style pizza. 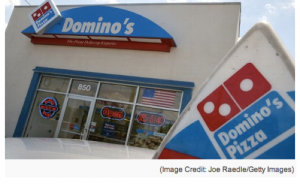 Last week I read an article on USA Today that Domino’s has announced they are offering Gluten free pizza in some locations, and I thought that was a pretty big deal. Definitely a step in the right direction for those of us who miss our pizza, right? Perhaps….

The company’s new gluten-free crust is made from rice flour, potato starch, rice starch and olive oil.  Domino’s worked with the National Foundation for Celiac Awareness to bring their standards to the company’s employees and kitchens.

“Offering Domino’s Gluten Free Crust is a big step for us, and we wanted to make sure we were doing it right,” Domino’s CEO J. Patrick Doyle said in a statement.“The prevalence of gluten sensitivity has become a real issue with significant impact on consumer choice, and we want to be a part of the solution,” he said.

Although the crust is gluten-free, the company only recommends that those with a mild gluten allergy enjoy the pizza.  It doesn’t recommend the crust for those with Celiac disease because it can’t fully guarantee the product hasn’t come in contact with gluten. This is an important point that made me take notice as most people I know aren’t just a little sensitive to gluten.  In fact, there is little known as to whether someone with Non Celiac Gluten Sensitivity can tolerate small amounts of gluten. I’ve heard some people claim to be able to, however, I know personally I can’t handle any cross contamination, though I lived a lifetime of the damaging effects (wasn’t diagnosed until I was in my mid 30’s) so perhaps my son (who hasn’t eaten gluten since he was 4) would be ok with a little cross contamination here and there. Or perhaps not. I don’t really know. But it’s certainly something I was surprised to see the National Foundation for Celiac Awareness endorse.  Anyway, just beware that you may not fare so well due to cross contamination issues and be careful before you over indulge.

According to USA Today, there are several other national chains now offering gluten-free options (to be honest, there are many  more, which we will start showcasing soon), but these are the ones which they pointed out:

•Chips. At Frito-Lay, the most common request on its consumer affairs line is for gluten-free offerings, spokeswoman Aurora Gonzalez says. Frito-Lay has recently begun labeling packaging on more than a dozen chips that are gluten-free with a special “GF” (gluten-free) icon or statement on the back of the bag.

•Subs. Subway has been testing gluten-free products, including bread and brownies, at some stores in four key markets since early 2011, says Tony Pace, chief marketing officer for the Subway brand. Those markets: Dallas/Fort Worth; Portland, Ore.; Tacoma, Wash.; and Duluth, Minn.

So what does this mean?

Well, it’s a sign that things are moving in the right direction for us! We just need to be careful to note the reality of the impact gluten has on our compromised bodies, and how important it is to manage our health. I urge you not to get too excited about the abundance of gluten-free products available to us now; beware of how you’re feeling and take note if you have an adverse response. It took me a little while to realize that cross contamination is sometimes an issue for me; my symptoms are typically gas, bloating, fatigue and headaches. Other responses you may be having are related to cross- reactive issues which I’ve outlined a bit here.

Because there isn’t a lot of research done on how gluten sensitivity and other food allergies and sensitivities affect us, we are often left to work through this on our own. So if you’re like me, you talk to anyone who is in a similar situation and see how it affects him or her. I hope one day to have a member base here where we can run polls and compile enough data to make a difference and help others like us. So for now, I post articles and my opinions, and I hope they help 🙂

So please – share your thoughts, opinions, ideas, etc. too! The more we learn about how we each successfully manage our food allergies and sensitivities, the better lives we lead.