Do you suspect your child has a gluten intolerance?

There are so many reasons to tackle this; your child’s future truly does depend on it. As someone who has suffered from various health issues since childhood (before anyone really talked about food allergies) I know first hand how important it is to avoid food allergens. I also know first hand how challenging it is to raise an allergic child, so I truly get the whole picture.  So trust me when I tell you that every tear, every frustrated tormented little cry for that dairy-laden ice cream, or that gluten-ful cupcake, no matter how hard it is to resist, must be resisted.  It’s up to you to help your child understand why it’s so important to be diligent, and to not feel embarrassed or afraid because they’re different.

We help them to feel normal by making adjustments to our routines. By giving them delicious foods that they’re friends are actually asking them for a bite of. And by helping them see that it’s ok to be healthy; that it’s actually better than ok  – it’s a kick-butt way of life because you look and feel amazing. We do all of this because they deserve the best, and it’s our job as parents to help them thrive.

We do it because we love our kids.

So, if you think your child might be suffering form a gluten related allergy or sensitivity, but are concerned about whether you can help them to live gluten-free, take a quick look at the definition again of celiac and gluten sensitivities: Celiac disease (also known as celiac sprue, gluten intolerance, non celiac gluten intolerance or non-tropical sprue) is a hereditary digestive disorder involving intolerance to gluten, usually occurring in young children, by marked abdominal distention, malnutrition, wasting, and the passage of large, fatty characterized, malodorous stools. Pretty disturbing symptoms, right? Certainly not something I want my child to suffer through! 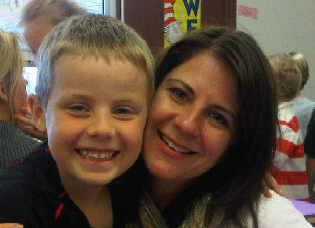 When I found out that my son carried both copies of the gluten sensitive genes, I decided to set him on the path of gluten-free living right away. I’m hopeful that by doing so, he won’t suffer from the many issues that I suffered through, and since he was so young when we discovered it (5 at the time) he hardly knows what he’s missing.

Here’s a picture from before we were both gluten free – note the puffy eyes and faces.

Now here’s a more recent picture, where we are both gluten (and dairy free). Puffiness is gone 🙂 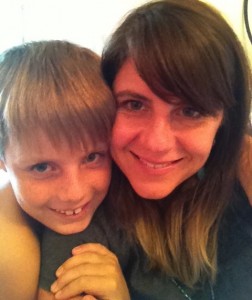 Is your child gluten free?

It’s  important to note that children are often susceptible to peer pressure and want to fit in, so to avoid them from not eating at the risk of being different, or feeling left out from the birthday parties and such, you will have to realize that this is as much a change of life for your child as it is you. You are now an advocate for your child’s health in a way that puts the responsibility on your shoulders; not a doctor’s or the school boards’, but on yours. It is now up to you to make sure they don’t feel left out, that they understand why they avoid gluten, and that you help them embrace the beauty of a healthy lifestyle.

My son occasionally says he wishes he didn’t have this allergy, but ultimately he has a far greater understanding of health and wellness, and always declines to eat anything that he knows might contain gluten as his understanding of how important a healthy life is, is far more important than the short-term gratification of a cookie. Once again, we can learn A LOT from our children!

Now, I know first-hand how nerve-wracking the prospect of raising a gluten-free child can be!

My initial thoughts were of how do I manage what he eats in schools, at sleep overs, parties, camps? What do I do to make sure he doesn’t feel left out when classmates have cupcakes for their birthdays?  Can we still go out to eat? And how do I protect him from cross contamination issues?

Since I’m not only the mom of a gluten-free child, but gluten free myself, I know what it is to live a lifestyle that is slightly more high-maintenance and not fully embraced just yet. I don’t know if it’s where we live (Austin is a health mecca, and home to Whole Foods), but we have received much support from restaurants, local grocery stores and his schools.

Research supports that by removing gluten from a child’s diet, they are less likely to develop related issues down the line. However, there just isn’t enough research yet to tell us if a gluten-free child will grow up to be able to support eating slight amounts of gluten later in life (I lean towards not believing that all, and embracing a life-long gluten-free diet to ensure optimal health and avoid all the related issues that can arise).

However, I have met several adults who claim that once they removed gluten and their intestines healed, they were able to eat small amounts here and there without a reaction.  Are these isolated cases? Until more research is done, we just don’t know. But what I do know is that I wasn’t about to set my child on the same health paths as I endured due to lack of knowledge and resources.

It’s the lessons we teach our children now, that will guide them through their lives. It’s never too early to start your child on a path to making the right health choices, and ultimately, a healthier, happier life!

According to the experts….

Here’s a passage from a site that I frequent developed by a doctor in Houston, Texas called The Gluten Free Society. I especially like his reason for developing the Society:

The origin of our dedication to the gluten free community…

Little Michael was only seven years old when his mother took him to see Dr. Osborne.  You see, he was diagnosed with a debilitating disease called juvenile rheumatoid arthritis.  Michael’s case was so bad that doctors didn’t know if he would make it.  Because of this, the Make-A-Wish Foundation actually stepped in and granted Michael and his family a wish (A trip to the Galapagos Islands).

Michael’s condition racked his body with headaches, muscle pain, joint pain, indigestion, and stomach pain.  He had been suffering since his introduction to normal foods at 20 months of age. He was in and out of the hospital so frequently that he had to have a permanent stent placed in his arm so that when he was hospitalized, it would be easier to give him an IV.

Imagine going through years of hospital trips, doctors visits, and horrible pain all before you reach the age of 10.  This was Michael’s story until his mother brought him into Dr. Osborne’s office.  After an extensive exam and laboratory testing, Micheal was diagnosed with non-celiac gluten sensitivity.  That was in 2005.

Today, Michael is gluten-free and very much alive.  He no longer has a plastic stent in his arm.  He is growing normally.  He doesn’t need to take as many medications to treat his symptoms. He is active in band, and he has a new lease on life.

Michael is alive today because he is gluten-free.  Does this sound like a diet trend?

Read more from them here.