A personal tale of Celiac disease, and it’s traumatic effects on the mind, body and spirit. 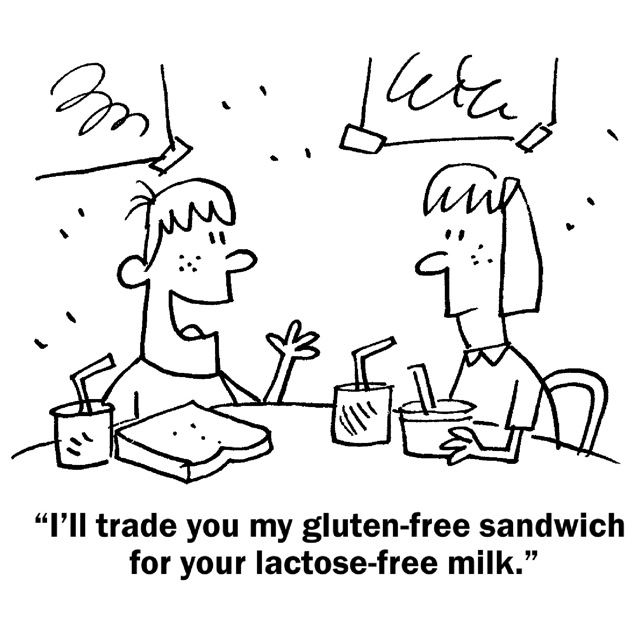 This is a guest post from our Organic Food Insider, Leslie. Here she shares a very touching, real story of what it’s like to have Celiac disease, how she discovered it, and what her journey entails.

I feel like I tell my story all of the time. I had stomach aches. I couldn’t figure them out. Doctor’s told me I had IBS. I read about gluten in a magazine. I cut it out. My life changed forever. Is it really this simple? No. But this is how simple my story has become when I share it with the masses. I’ve never gotten more personal than I will right now, but let’s begin.

I played soccer growing up. It was my passion, my addiction and all I ever wanted to do was play pro and be Mia Hamm. Yet, my long days of playing were always interrupted by stomach aches. I once ran 2 miles off the soccer field, during a game, just to use the restroom at my own house. I couldn’t breathe, my stomach was so wrecked. This is one of the first instances I remember of my life being interrupted by stomach problems.

Most of my memories are shameful bathroom excursions into the back of my grandmother’s house. We’d eat pasta dinners every Sunday and I’d always feel horrible afterwards. I’d sneak to the far bathroom and rock back in forth, in tears, as I silently tried to use the restroom. 30 minutes later I’d walk out, hoping no one noticed my long absence from the family gatherings. These were so frequent that they became normal. At least three times a week, I had bouts of stomach aches like that one.

The most embarrassing times were in high school, when my first boyfriend didn’t understand why I always spent hours in the bathroom. We’d eat donuts in the morning on the way to school and I’d spend first period crying my eyes out in one of the stalls, unable to function until I emerged. The memories of sitting in the journalism classroom, immediately feeling uncomfortable and having to rush out, are still so vivid. There’s something so alienating about having to quietly leave the room and go to the bathroom. It’s as though your life is being put on hold – you’re disappearing from reality.

The alienation became worse when I entered college. I met some new friends… who happened to be stupid friends… and we’d drink constantly on the weekends. Beer wouldn’t immediately get my stomach in a knot, it was only the aftermath which left me helpless. The morning after a party I’d be unable to move out of my bed. I’d make it to the bathroom only in helpless instances. I was told that it must be a bad case of  a “hang-over”, even going so far as to think I had a bout of alcohol poisoning. Yet, it was worth it at that time to be able to drink and be accepted rather than stop and spend my nights at home in my dorm. After a bad experience one night out with friends, I finally woke up and realized that this wasn’t who I was…. but by this time my stomach issues had gone way beyond the gut.

There are many studies that have come out which point to women with undiagnosed Celiac Disease experiencing bouts of depression and anxiety. After reading these studies, I have no doubt that the constant depression I experienced in my life was a direct result of the high consumption of gluten throughout my entire life. The gut is so permeable that everything we put into it directly affects the rest of our bodies. There were days where I wouldn’t be able to get out of bed just because I didn’t feel life was worth anything. There were also days when I was so overcome by anxiety that I’d just eat anything in sight until I couldn’t fit anything else into my stomach. This continued into my Sophomore year, even after I’d cut back on drinking and junk food. I thought cutting out crap was enough – but it wasn’t! I traveled to Belgium in the summer of 2009 hoping the alone time and European tour would bring me enlightenment. Of course, the Belgian diet of cheese, bread and beer did nothing to help my cause. My anxiety worsened and I remember days where I ate at least 5,000 calories and still didn’t feel satisfied.

When I returned to the US, I transferred schools and immediately sought help. The first doctor I saw put me on a high dose of anti-depressants, which killed my appetite. The combination of every food hurting my stomach and my own anxiety issues made every aspect of my day revolve around food. I was obsessive and succumbed to the eating disorders that so many 20-year-old women can’t escape. This complicated many issues, as the nutritionist I saw who “just wanted me to eat a snickers bar” tried to tell me that eating chips and cookies wasn’t a bad thing, it was me that had the issues all in my head. I told her that everything I ate caused me stomach pain and that there were weeks at a time when I’d become so dehydrated and sick that I couldn’t eat anything at all. I’d vomit at least three times a day during those weeks, which many doctors labeled “Gastroenteritis.”

I finally began to read about the connection between food and the body. I was convinced that my mental issues weren’t caused by some chemical imbalance and that what was going on was not just a correlation between neurotransmitters and the brain. I remember picking up a magazine of my sister’s and reading a 30 word segment in the middle of the page – it described something called gluten-intolerance and how it’s a rare issue that is never diagnosed. That day I cut out gluten. Two weeks later I tried to tell my nutritionist that I hadn’t had a stomach ache all week! She told me that it was just me believing that the gluten had helped and it wasn’t truly an issue, but still wrote down some gluten-free options for me. (As I look back now, this woman was a damn idiot with her suggestions of potato bread and potato chips as options for a gluten-free diet. How the hell does she even have her degree!?!)

A few weeks later, I went and saw a GI doctor. They ran tests and gave me heartburn medication because I’d been off gluten for two weeks and didn’t show positive blood work for Celiac. I let them do an invasive procedure, and it showed what I’d read to be true – my Celiac was so severe and had gone undiagnosed for so long that my stomach lining was in horrible shape.

From that point on, my life didn’t get any easier. I was still struggling with anxiety and depression and had no guidance on how to go about eating gluten-free on a college campus. I didn’t know that gluten hides in certain sauces and foods. It’s in gum! It’s in salad dressings! It’s EVERYWHERE! I went stomach pain-free most of the time, but every so often I’d have an issue where I’d feel horrible. I’d back track to where I had eaten and I’d realized that I could have had cross-contamination or I’d actually eaten gluten without knowing.

Eating gluten-free on a college campus was the worst. I’d pack my lunch as much as possible, but many days I’d go for so long and only have an apple or some hummus or a LaraBar. Those were my staples. Over time, I was able to find other options – like when I walked into my gym one day and there were these really colorful bars sitting at the cafe. I had seen them being promoted around town and so I tried one. It was amazing and I would carry them with me on campus all of the time – eating at least 2 a day. I continued to try other energy bars, but these were the only ones that didn’t leave me with a headache or a stomach ache.

I appreciated the ingredient label and began to look more into all of the claims on the packaging. I didn’t know that soy-free was a good thing and I didn’t even know what agave syrup was! So I began to educate myself.

I discovered that more foods than gluten affected my body. I cut out soy and all dairy and any stomach cramps or slight issues that remained began to cease!! Who knew that you could have so many adverse reactions to foods? The more I read, the more I realized that eating REAL food, that isn’t processed, was the number one choice for me.

I began to cook all of my own meals, using raw food cookbooks for innovative ideas! As I became more of a real foodist, I regretted the times where I’d slip. As the gluten-free movement came under way, more options became available to me and it became easier to slip into a processed-yet-gluten-free-frenzy!

Eventually, I found my into working for a company that stands for everything that I believe in. While there can be a lot of drama over the true meaning of “natural” in the natural foods industry, it is a comforting place to work. Last week, I attended a Natural Products Expo, where companies were overjoyed to tout their labels of “gluten-free” and “dairy-free” and “nothing added.” No one asked me why I needed my food to be that way and every person was more than accommodating. Furthermore, it is blissful to be able to sit around a dinner table in the comfort of your bosses and co-workers and friends and enjoy a gluten-free meal of sweet potatoes and humanely-raised animals and deliciously-cooked veggies. There isn’t a moment in the past two-weeks where I’ve had to ask if any meal prepared for me was going to make me sick, and that’s a comfort that I’ve longed for since my diagnosis almost three years ago. For anyone who is currently struggling with the beginning stages of stomach issues or is in the middle and feels alienated by their choices, please reach out to someone whose been there. It’s not worth going in alone. I myself enjoy the comfort of the natural foods industry, but I believe that you can find understanding people everywhere.

We’re grateful to Leslie for sharing her story, so please share your comments below and let us know of your own journey.  And remember: be cautious, and be your own health advocate. Only you know your body, and what you’re feeling, and it’s truly up to you to help discover the root of poor health.

11 comments on “A personal tale of Celiac disease, and it’s traumatic effects on the mind, body and spirit.”

4 Pings/Trackbacks for "A personal tale of Celiac disease, and it’s traumatic effects on the mind, body and spirit."