Posted by: Jennifer Mansfield Categories: Blog posts Daily Posts What's Trending
Comments Off on ‘Pink Slime’ makes it way to a store (and school) near you 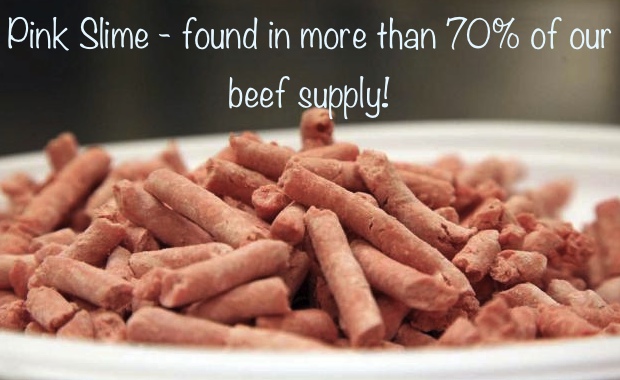 What is Pink Slime?

“Pink Slime” is the term for a ground-up amalgam of beef scraps, cow connective tissues, and other beef trimmings, once useful only for dog food and cooking oil, that are treated with ammonia to kill pathogens and then added to stretch the use of “traditional” ground beef (what most people once called simply “ground beef”). It’s also known as “lean finely textured beef,” and it’s produced by a single, rather profitable, company in the United States: Beef Products Inc.

After you break down a whole cow, you’re left with the trimmings; the bits and pieces that can’t be turned into anything (that no one wants). Most butchers would pay to have it taken away, but in America, we’ve figured out a way to make it not only legal to use, but it’s now in more than 70% of our ground beef supply, including PUBLIC SCHOOLS.  In fact, Pink slime is allowed in any school, in America.

Scary enough? Well, picture this – it’s virtually impossible to tell when it’s been used to pad ground beef, so how are you to know whether the ground beef you’re buying contains it?? Just short of going to a butcher and watching them grind it in front of you, there’s no way to know.

Why is this dangerous? Several reasons.

First, because it comes from the outermost part of the animal carcass, it’s also more susceptible to contamination than other cuts of meat. That’s because it could come in contact with the cow’s hide, which could have excrement containing pathogens like the dangerous forms of E. coli.

Second, the ‘meat’ is washed with a combination of water and ammonia (household cleaner) to kill the e.coli and other diseased elements that are inherently contained within the animal byproducts. Pink Slime is believed  to be in up to  70%   of all ground beef supplies in America, and shockingly, the USDA has made it LEGAL to NOT register the use of ammonia in this process.  Yes folks, the USDA, which is meant to protect us, has made it legal to use ammonia in our food supplies, and has publicly stated that Pink Slime is SAFE to eat.

Watch celebrity chef Jamie Oliver stun a live audience with a description of Pink Slime, and how readily available it is in the US marketplace. SHOCKING to say the least!

After  Jamie Oliver went on a tirade against the filler last year, McDonald’s, Taco Bell and Burger King decided to stop padding their meat offerings with it. Still, the USDA plans to purchase 7 million pounds of it for use in school lunches over the coming year! Where’s it going? Most likely to a school near you.

If your children’s school uses the meat that the complex federal and state bidding and supplying system procures, then the odds that they’re serving “pink slime” are high. And they might never know it.

Last week there was an outcry again about Pink Slime on social media outlets such as Twitter and Facebook, and the USDA responded. According to the New York Times, the Agriculture Department says that starting next fall, schools can stop feeding students a common ammonia-treated ground beef filler that critics have described as “pink slime.”

Progress? Some, I guess, but to be honest, this shouldn’t even be an issue to begin with! How can the USDA, which is meant to protect us, continue to put us in harm’s way? Why are food allergies on the rise? Why are diabetes and other auto-immune diseases on the rise? Well folks, just take a look at the food marked “safe” by our good ole’ government and it doesn’t take a genius to figure it out. Americans are getting sicker and sicker, and the US government is helping the agricultural industry profit from sickening uses of household chemicals to treat our food supply. In fact, ABC News reported they asked the USDA for an on-camera interview and they refused, stating that they have no intention of changing their policy regarding labeling of beef to include the use of “lean finely textured beef”, or “pink slime”.

It’s important to note that Publix, Costco, HEB and Whole Foods assured ABC News that they DO NOT use ground beef with pink slime fillers. Also, anything labeled “organic” does not contain fillers.

Pay attention America – you cannot count on your government to protect you. You must be your own food and health advocate, and help get your voice heard.

Sign the petition  so your voice can be heard and we can let the USDA know we aren’t going to stand for the continued misuse and mistreatment of our food supplies!