The grassroots movement to help Americans let the FDA know that we absolutely WANT GM foods to be labelled hit a milestone today when they submitted a petition to the US Government with more than 1,000,000 signatures from Americans in each of the 50 states. Read below to see the email I received from Justlabelit about this exciting news! This is a testament to what we can accomplish by each doing one small step towards the greater good.

Here is a comment from their site and the email follows:

Congratulations, together, we have made history. We now stand more than one million strong in asking the FDA to label genetically engineered (GE) foods. Today, March 27 is the date that the FDA is required to respond to the petition and it took us less than 180 days to accumulate a record breaking number of public comments—a testament to the power of our collective voices to demand our right to know what’s in our food. This campaign’s strength is due to the over 500 diverse partner organizations who helped galvanize the American people to this moment. 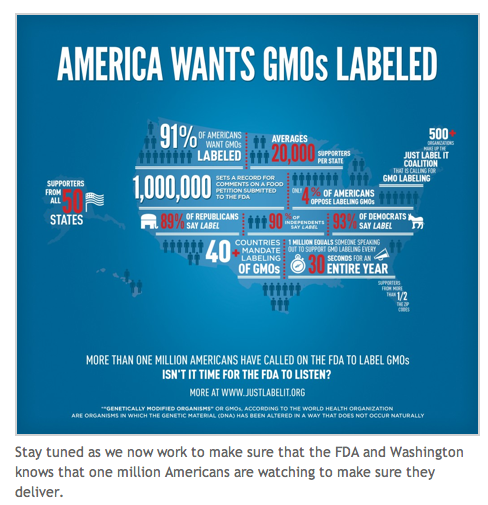 Today we’re delivering over one million comments in support of labeling genetically engineered foods to the FDA – because of people like you. By submitting a comment, emailing your friends, posting on Facebook, and talking to your coworkers and neighbors, you made this possible.

Comments were submitted by Americans from all 50 states – people from tens of thousands of different communities around the country. This record-breaking achievement proves that Americans care about how our food is produced and the right to know what’s in our food.

In the era of pink slime, deadly melons, and BPA in our soup, more and more of us are coming together to demand the right to know about the food we are eating and feeding our families. It’s time that the FDA gives us the same rights held by citizens in over forty other countries: to know whether our foods have been genetically engineered.

This campaign doesn’t end with today’s delivery. We’ll need your help again in the coming weeks and months to keep up the pressure on the FDA and to make sure our leaders in Washington know that more than one million Americans are watching their next moves.Today, we’re also releasing results from our new public opinion survey on GMO labeling with a cool infographic. It found that nearly all Democrats (93%), Independents (90%), and Republicans (89%) favor labeling. At a time when partisan rancor dominates the public conversation, there are few topics that can muster such overwhelming support. Yet so far, the FDA has refused to act.

Thank you for everything you’ve done so far – and for all that you’ll continue to do in the weeks ahead.