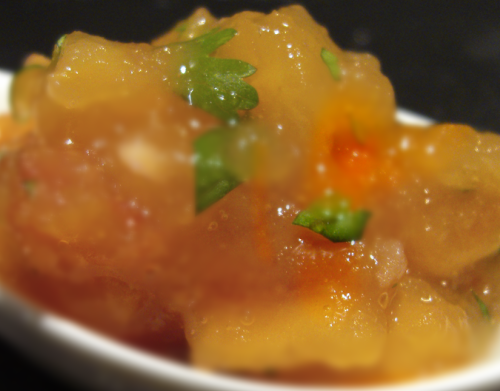 Since we’re grain free around here, I don’t often enjoy a slice of toast or something equally as fun to put a jam on, however, this is a great complement to meat and fish, and to those of you who are much better bakers than I, it would be perfect on your favorit coconut or almond flour pastries or breads.

What I love about this jam is the fresh ginger and cilantro which really add depth to the flavor and make for a fresh, not-too-sweet jam.

If only they would have had this at our the restaurant I went to the other night when I ordered grilled pork chops. Since I’m gluten and dairy free, they just added some simple S&P so while it was tasty, it could have used a little help from our Cilantro Apple Jam!

I think this might be a new addition to our holiday dinners as well 🙂  Enjoy!