Today’s Inspiration: the power of belief 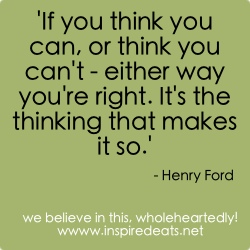 I was told once that the strength of a belief is more powerful than any other life force; that people who willed themselves to heal, would heal, and those who wished themselves sick with thoughts of self loathing and despair, would end up ill.

It seems a far out concept to me sometimes. That if I simply will something, it will be. Why then can I not will myself to not have food allergies? Or to lose those last pesky 15 pounds? To be a better runner? Or to have endless amounts of money?

Perhaps it’s less important what you wish for, and more important that you truly believe that you can do it. I have to admit that someone who can overcome cancer by sheer will, and determination, coupled of course with some sort of regimen to defeat it, has a very powerful belief system, that probably does transcend superficial levels, and makes them more powerful in their quest.

So in other words, if you idly sit by and wish for something to happen, it’s most likely wont.

If, however, you visualize your goal. Truly set your mind to it, and send that energy out, I believe that you will achieve your goals. The timeline to do so might not be as fast as you want, but it will happen. There are many reasons behind that, and the message is a bit more deep than I intend for a Friday afternoon, so instead I’ll just leave you with this. A reminder from Henry Ford, a man who was a pioneer in the automobile industry.

A man who envisioned the unknown, and undone and made it happen.  A man who understand the power of the belief system.

Give a shot this weekend – start turning your thoughts from negative to powerful. Try it with one small belief at first, and let it unfold. The results will move you in ways you never imagines to continue to open your mind, and turn your beliefs to the positive.

Oh, and one more cool thing about all this? Once you start that positive belief/energy cycle, you’ll attract some of the most incredibly positive, loving and giving people you would otherwise never have known.

The universe gives you what you give it. Now go forth and prosper, positively 🙂

2 comments on “Today’s Inspiration: the power of belief”

1 Pings/Trackbacks for "Today’s Inspiration: the power of belief"