Should Paula Deen profit from her diabetes? 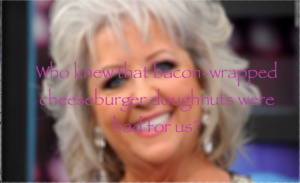 A couple days ago I posted about Paula Deen announcing that she was known she has Type 2 Diabetes for over 3 years now, and is just coming forward with this information. While I watched her on The Today Show, I was instantly annoyed and shocked that she was so flippant about her announcement, especially when she announced that she has partnered with pharmaceutical company, Novo Nordisk, to promote a diabetes drug. And I grew more and  more angry and frustrated as I thought about it throughout the day; she has made a fortune promoting excess, indulgence, high-fat, high-calorie lifestyles and then when she (not surprisingly) contracts Type 2 Diabetes, she then profits from a drug to manage diabetes symptoms.  Instead of teaching us how to eat delicious and healthy foods, she takes her famously fun and southern-hospitality approach to life to television and teaches us about greasy, high saturated fat, highly caloric, deep-fried foods.  And rather than take the high road and admit that her lifestyle has led to diabetes, she simply chooses to profit from a diabetic drug to manage symptoms.

How about prevention?? How about healthy eating??   Nope, Paul Deen just plans to stand along-side the majority of Americans (more than 60% of us are obese) and when we find ourselves with the same diagnosis she has been giving (Type 2 Diabetes) she will surely be there to profit from the drugs we start taking as well. Shocking and sad approach in my mind; when she could have leveraged her celebrity to admit her lifestyle has led to Diabetes, she instead chooses to suggest it’s a genetic predisposition and simply profit from the drugs that will manage her symptoms.