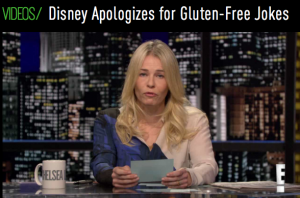 First, let me say thanks to The Gluten Dude for calling my attention to this video clip from Chelsea Lately. While I do find some of her skits funny, this one wasn’t doing it so much for me. Now, would I feel differently if she wasn’t directly making fun of something I and our son deal with? Perhaps.

So what is it that she was poking fun of that has me annoyed? Maybe you can guess if you follow me on Facebook because I’ve posted the petition online this past week… the Disney episode that got pulled from video on demand where the gluten sensitive child was made fun of for his food allergies, and in fact, the other kids even threw a pancake in his face during the episode.

Ok friends, here’s where I get out the soap box for a sec. Yes, I can admit that some might find the skit below funny, and under the right context (as in, not making fun of a cause that so many of us supported because it means something to us) I can appreciate the humor.

But as if to put salt in the wound, Chelsea Handler announces that she’s “supposed to be gluten free” but eats bread anyway because she either doesn’t mind that she feels like crap when she does, doesn’t value her health or is just plain too weak to resist it. Whatever the reason, I don’t particularly care. What I do care about is the message she’s sending to those of us who do take our health seriously and more importantly that of our children: that it’s ok to eat gluten now and then if you’re allergic – you can just pay for it afterwards. Here’s the clip for those of you who care to watch it. 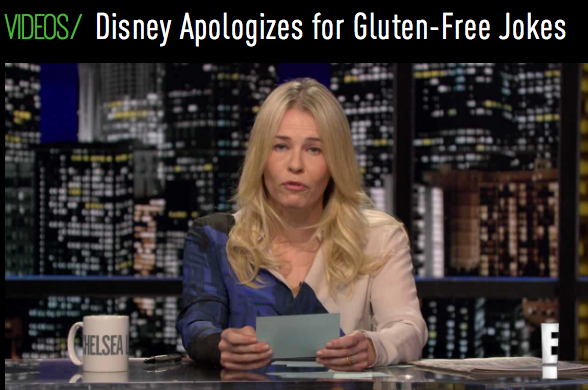 I will say the “He makes me look macho” line is great. But then she goes on to say that those of us who take gluten-free seriously need to “shut the f–k up”. And compares being gluten-free to being vegan.  One is a choice made based on a moral consciousness which I completely respect, while the other is based upon a physiological health condition that can kill you. Hmmm, a bit different in my humble opinion.

Anyway, the reality is, there’s just not enough research out there to support whether that’s safe to “eat gluten now and then”, and Doctor’s can only go off the reactions from their patients. And reactions tend to vary from person to person.  Here are just a few of the symptoms associated with having Celiac Disease or Non-Celiac Gluten Sensitivity (NCGS):

I don’t know about you, but I had most if not all of those throughout my life until I removed gluten. And these are certainly not things I want my son experiencing. Not only are they unpleasant in the moment you’re dealing with them, but they lead to long-term nutritional deficiencies, anemia, respiratory issues, Candida overgrowth, leaky gut, adrenal fatigue, and various other auto immune disorders.

And what some of my NCGD friends can handle (such as wheat in their beauty products, for example) I can’t tolerate. I know some other gluten sensitive folks who are able to eat gluten now and then, though they’ll be the first to admit they race to the bathroom afterwards and spend the night feeling like crap. So for me, I skip it because nothing is worth me feeling like crap, you know?

If Chelsea Handler has such little willpower or desire to stay on a healthy track for her own good, so be it, but to use her fame and public persona to state that it’s no big deal to eat gluten when you have a sensitivity and mock the “pancake in the face Disney episode” is just plain wrong.