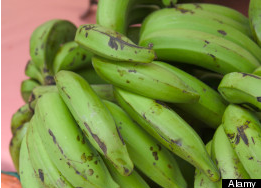 I’ve run across several articles lately since the  Journal of the Academy of Nutrition and Dietetics published that researchers found a way to make pasta out of green banana flour. Since it’s naturally gluten-free and has passed taste tests compared with whole-wheat pasta, I was intrigued by this and wondered if this is something we can test on our own?

Huffington Post wrote about it back in June, and I especially like the comment they noted about the fact that using green bananas will not only provide a safe and tasty option for us gluten -free guys and gals, but that it will also help the farmers as it adds a completely new revenue stream for them (typically green bananas are not a profitable item). “There was no significant difference between the modified pasta and standard samples in terms of appearance, aroma, flavor, and overall quality,” study researcher Renata Puppin Zandonadi, PhD, of the University of Brazil, said in a statement. “Green bananas are considered a sub-product of low commercial value with little industrial use. For banana growers and pasta product makers, there is the possibility of diversifying and expanding their market.”

Researchers compared a standard whole-wheat pasta preparation made from whole wheat flour and whole eggs with one made from green banana flour, egg whites, water, and gums. The alterations reduced the fat content and increased the protein value of the green banana flour-based pasta, which is important because gluten removal of current gluten-free pastas typically reduces some proteins. The egg whites and gum result in pasta that is less sticky than typical gluten-free pastas, and promote firmness, elasticity, moisture, and uniformity.

According to Science Daily, the modified pasta had a high quantity of resistant starch, which may help control glycemic indexes, cholesterol, intestinal regularity, and fermentation by intestinal bacteria.

“Considering that untreated celiac disease promotes cancer in intestinal cells and a highly inflammatory mucosal status, developing gluten-free products with bioactive compounds such as the ones present in green banana flour is important for celiac disease patients,” concludes Dr. Zandonadi. “Patients will benefit from ingesting a product with a better nutritional profile made from an ingredient that is produced and consumed throughout the world.”

So the question now is, when can we expect it to hit the market??