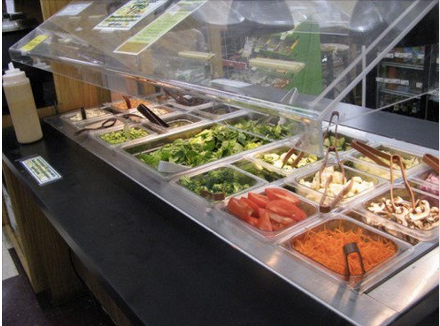 To commemorate its new location on 57th Street in Manhattan, Whole Foods has donated 57 salad bars to public elementary schools in NYC. The supermarket giant teamed up with Mayor Bloomberg on his never-ending quest to bring healthy foods to New York City schools, and the new lunch stations will make it even easier for kids to indulge in salads and veggies every school day. Together, Whole Foods and the city have already installed 1,000 salad bars in schools citywide.

The 57 new salad bars donated by Whole Foods are valued at over $300,000, an expense that the schools’ budgets would normally not allow. With these new facilities, Mayor Bloomberg hopes to encourage students to choose healthier foods by making fresh veggies more appealing.

What’s even better is how they targeted the schools which are included in this program.  Many of them are in neighborhoods with little or no fresh vegetables available. By providing these salad bars, Mayor Bloomberg is helping to expose children to healthy foods, and create an opportunity for healthy choices and habits.

According to NYC.gov, The Salad Bar initiative is just one of the Mayor’s programs to help fight childhood obesity and Type II Diabetes in New York City. The program’s goal is to have salad bars in each of the city’s public schools by 2015.

I wonder which city is next on Whole Foods’ urban improvement plans?