Unable to afford corn, rancher feeds his cattle candy instead

As the price of corn rises due to draughts across the midwest, one rancher in Kentucky has turned to candy to feed his herd of cattle due to the rising cost of corn.

At Mayfield’s United Livestock Commodities, owner Joseph Watson is tweaking the recipe for success. “Just to be able to survive, we have to look for other sources of nutrition,” he said.

Claiming that “It has a higher ratio of fat than actually feeding straight corn,” owner Joseph Watson purchases rejected candy deemed unfit for human consumption and combines it with an ethanol by-product and a mineral nutrient before giving it to his cattle. 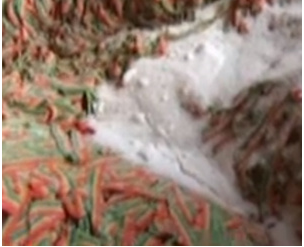 Snapshot of the candy, fee mix being fed to the cattle

“This ration is balanced to have not too much fat in it,” said Watson, noting that the cows appear to be healthy and are gaining weight as expected.

Ok folks, let’s start with the fact that he’s feeding his cattle candy, and measuring the effect the candy has upon his cattle simply by their weight. They’re gaining weight at a healthy range so far, so it must be safe, right?

CANDY: IT’S WHAT COWS CRAVE! I guess they don’t have grass in Kentucky?