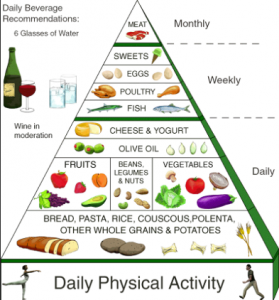 This morning while getting ready for our day, the Today Show was on in the background like it often is. And while most of what they talk about is fluff, occasionally there’s something that makes me kick up the volume a little bit. Like it did today.

While we were finishing breakfast, and packing up our son’s lunchbox, we saw this piece about the benefits of following a Mediterranean Diet. The study released by the New England Journal of Medicine shows that a Mediterranean diet rich in fruits, vegetables, olive oil and a little wine can cut the risk of heart attacks and strokes by 30 percent. Often times, weight loss and other improved health conditions are common too.

Of course, they discourage most processed foods, including baked goods (if it comes in a package, think twice before you eat it) but they do allow for a daily dose of sweets.  I agree that the occasional low glycemic goodies made from nutrient dense coconut or nut flours are ok, and will help keep you on the right track, but you’re best to keep them as a rarity, not a regular indulgence. When you have something once in a rare while, it’s an indulgence. When you have it once a day, it’s a regular occurrence, so make sure it’s working in your favor. Learn to treat sweets and baked goods as an indulgence rather than a ‘right’, and recognize that sugar is nature’s form of a sweet treat.

If you google Mediterranean Diet, you’ll find a food pyramid that I don’t particularly love. I discourage high consumptions of grains for most Americans as the quality of our grains is not the same as you might get in Europe. Remember, Europe has banned Monsanto’s GMO seeds, so the grains in Europe tend to be healthier, are not genetically modified, and are most often free of pesticides and hormones which wreak havoc on our bodies.

So while I agree with much of with the Mediterranean Diet encourages, I approach it from a slightly difference approach. For example, if you

eat smaller portions, your body has an easier time digesting the foods, causing a healthy balance in metabolic function. Eating smaller, more frequent meals also encourages better digestion and higher metabolic rates. I also agree with the occasional glass of red wine to help you relax, which can make dramatic improvements upon adrenal systems, affecting cortisol levels. Another aspect of the pyramid I agree with is the encouragement of daily physical activity.

Just like with most things we promote around here, baby steps will make a big difference towards better health. Here are some quick tips:

Name one small change you can make to live a healthier life!