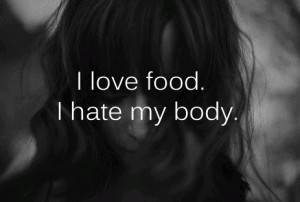 Today I read a post by someone I’ve been following for some time now. He owns a blog called The Civilized Caveman, and posts some of the most delicious recipes I’ve seen from Paleo sites, and I love that it all comes from a guy’s perspective. Living with a husband who still holds on to his grains and dairy, I enjoy reading the perspective of a guy who gave it all up and hasn’t looked back. It helps me when I think about how to talk to my son about why I want him to give up grains, and why he has had to give up dairy and gluten.

Image from The Civilized Caveman

So it was with a bit of surprise that I read George’s post yesterday titled Dear Bulimia – you fought hard, but I won.  It’s a raw, honest portrayal of his journey with Bulimia; when and why it started, and how he finally overcame it.

My name is George Bryant.

I suffered with Bulimia and body image issues for 12 years!!

I am a man and there is no shame in admitting I needed help!!

Here is my promise: I beat this and will remain strong and love myself from this point on.  I will lead by example and do my best to guide others on the same!!

Bulimia isn’t something new to me. In fact, I remember when I first heard of it; I was 12, and it was on a show I used to love to watch called Diff’rent Strokes, when they tackled it through the sister’s character, Kimberly Drummond. I was 10 and it made a big impact on my life. And while I have spent far too many times hunched over a toilet than I care to remember, those were bouts born from food allergies that ended when I cut out the allergic foods. I never knew what it was like to purge for emotional reasons.

And while I understand the psychology behind the disease, I have to admit I haven’t considered it from a guy’s perspective. You can read George’s full article here. I hope it helps you if you, or someone you love, might suffer from Bulimia.

And I thank George for being so honest, with himself, and with us. I have no doubts this will be a turning point for both he, and some of his followers.