Death to the Twinkie? 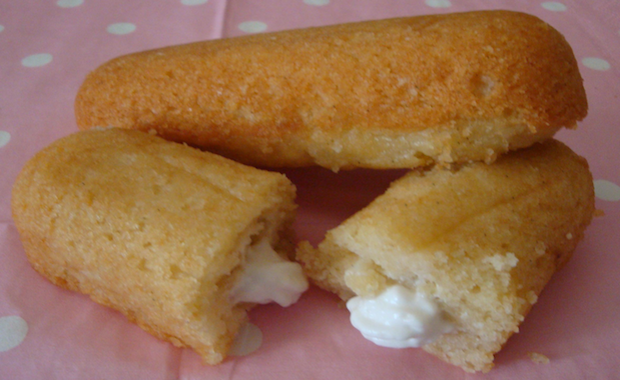 As I heard yesterday that  Hostess declared bankruptcy to reorganize in an effort to maintain their same ‘quality’ of products among continual product cost increases,  I thought back to growing up and seeing that little yellow cake in my lunchbox. My mom had the best of intentions when she slipped it into my lunchbox, and I devoured it happily like every other kid I knew. That slightly off-yellow colored sponge cake with the gooey creme filling left me with a sugar buzz and a rumbly tummy, but my how I loved it!  Now, you couldn’t pay me to eat it (not only due to the allergies, but just based on sheer common sense from a nutrition standpoint) and knowing what I know now, I certainly wouldn’t feed it to my son (sorry mom!).

The history of the Twinkie:

The story goes (and I can’t fully substantiate it…)

Twinkies were created in 1930 as ladyfinger-shaped sponge cakes.   They were first thought up by James A. Dewar, the vice president of Continental Bakeries who sold under the Hostess brand.  Dewar sought to put the machines used to make cream-filled strawberry shortcake to good use when strawberries were out of season and the machines normally sat idle; so he came up with an idea to create a banana cream filled cake.

During World War II however, bananas became scarce, so Hostess decided to switch to vanilla cream, which ended up being much more popular than the banana filled version. When Twinkies first came out, they not only were banana filled, but they also had an incredibly low shelf life.  This was due primarily to the dairy products contained in Twinkies giving them only a two-day shelf life on average, which obviously cut into the profit margins.

With the need for longer shelf life, Hostess started substituting ingredients in the original recipe with artificial ingredients, among those are cellulose gum, which gives Twinkie cream its smooth feel.  Another place you can find this cellulose gum is in rocket fuel.

According to Medical reporter Dr. Holly Phillips, who worked with author Steve Ettlinger who spent over five years tracking down the source of every ingredient found in the mysterious Twinkie:

The ingredients cellulose gum, calcium sulfate, and polysorbate 60 are also used in sheetrock, shampoo, laundry detergent, and even rocket fuel.

“I was surprised that so many not only came from petroleum, but at least five came from rocks,” Ettlinger says. The vitamins, artificial flavors, and colorings all come from the fossil fuel petroleum. Phosphates from limestone make Twinkies light and airy. Sorbic acid is made from natural gas. That really blew my mind,” Ettlinger says.

But that’s not the only fuel based ingredient in a Twinkie.  The chemicals that make up the artificial butter flavor are themselves derived from petroleum.

Another interesting ingredient is corn dextrin.  This gives Twinkies their sticky crust.  Another place you can find this wonderful ingredient is in various glues;  for instance, the glue that you find on the back of envelopes… But what about that deliciously creamy middle? “There is no cream in the cream, as they say. It’s mostly Crisco,” Ettlinger says.

For those of you who still wish to serve these spongy little cakes of chemicals, read on for the ingredients list, and then I ask you; is it any wonder they are going out of business? In a time when social consciousness is helping us to be more aware of our past nutrition mistakes, when obesity is an epidemic, when food allergies and intolerances are rampant, and we are aware of the flaws of the food pyramids of past it’s hardly a surprise that this “enriched white bleached flour based company is struggling”. Not that I wish anyone ill-will or economic failure, but I do support a company’s effort to keep our people healthy while feeding them delish foods.  But then again, maybe you don’t care, and just want to indulge.  I’m fine with that, but I hope you choose to indulge in something with an ingredients list you can mostly identify, and almost certainly pronounce (or that my spell check doesn’t identify  as incorrect spellings as they are unrecognized words – see the words highlighted in blue among the ingredient lists as the ones which were unrecognized)

Ahhhhh….. Hostess A part of my childhood that my son will never know, and one that I don’t lose any sleep over him doing without. Call me a tough momma if you will, but I can sleep better when I send him off to school with a homemade trail mix instead.

Best of luck to you Hostess, but I wish my readers better health than your tiny little prepackaged goodies can offer them!

1 Pings/Trackbacks for "Death to the Twinkie?"