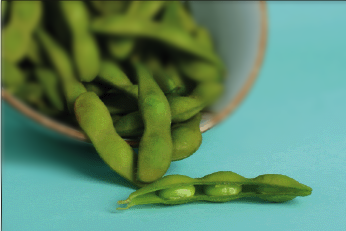 Unfortunately, not in the way we were taught to think. Soy is a success story of a very talented marketing agency that helped create and foster the belief that our current supply of soy is good for us.  Soy is one of the most commonly genetically modified foods, after corn and wheat, and followed by cotton and potatoes.

Before I get to the professionals technical jargon (aka medical-ease) I have a solution you can use in place of soy for some of the more common uses.

1. Coconut Aminos – replaces soy sauce for all common soy sauce uses. Luckily, this coconut based sauce doesn’t have a

coconut-y flavor, a very low glycemic (GI of only 35), is an abundant source of amino acids, minerals, broad spectrum B vitamins, and has a nearly neutral PH. (You can click on the image to the right to visit our shop to purchase some from Amazon in case you would like to try our brand we use at home!

2. Almond, rice, coconut or hemp milk  – all fantastic soy milk alternatives. No, you won’t be able to visit Starbucks for your fave soy latte and replace it with any of these other milks I mention, however, many more progressive coffee shops, juice stands and restaurants are now offering most of these to you.

We couldn’t have said it better than the professionals at Natural Health Strategies, so below is an excerpt from them on the dangers of soy. Read on to learn why you MUST avoid this highly toxic substance which is so often touted as a health food.

And what’s worse is so many of you are using soy as an infant formula alternative. Please read on to learn of the dangers to our children who are regularly fed soy.

Right around now, you’re probably asking yourself how so many people in Asia consume soy without trouble, right? So did a lot of the experts.

Oriental cultures consumed mostly traditionally fermented soy products such as miso, tempeh, natto, shoyu and tamari. (Tofu is not fermented, and falls into the dangerous soy foods category.) They consumed these soy foods in small amounts, as a condiment.

The Weston Price Foundation has a list of studies carried out from 1971 to 2003 showing the adverse effects of dietary soy.

To give you an idea of how condemning these studies are, here are just a few summaries. There are over 50 more!

So do yourself a favor please, and stop eating soy. If you can’t do that, then please try to reduce it to only once a week. There’s not enough research pointing to whether that reduction will help eliminate all these dangers mentioned above, but we have to believe its a good start.

Tags: dangers of soy is soy healthy soy
« CITY KIDS MUCH MORE LIKELY TO HAVE FOOD ALLERGIES THAN RURAL ONES
MyPaleo Restricted Foods »