We currently eat Genetically Engineered Food, but don’t know it. 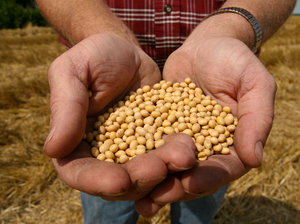 One of the most common questions I’m asked, besides how I get our son to make healthy food choices is how to avoid GMOs. GMOS, or genetically modified organisms are everywhere, and many of us have no idea why we need to avoid them, whether it’s just a way to eek more money out of us, or if it’s really worth the extra effort.

One of my favorite blogs to follow in the effort to clean your life of GMOs is Food Babe. Check out Vani’s site for constant updates on foods to choose, those to avoid and to help support her never-ending quest to call out big food companies on their hidden GMOs.

Today, as much as 86% of corn in the U.S. is Genetically Modified. GMO corn has been engineered in a laboratory to produce pesticides in its own tissue so that once a bug eats the crop, it will die, rather than continue to feed on the crops until the crops die.

So, the food itself, is a pesticide.

So what’s a GMO?  A genetically engineered food is a plant or meat product that has had its DNA artificially altered in a laboratory by genes from other plants, animals, viruses, or bacteria in order to produce foreign compounds in that food (which causes the bugs to die when they eat them).  This type of genetic alteration is not found in nature,  is experimental and the correct scientific term is “transgenics,”. You’ll also hear them called  (GE) genetically engineered foods. GE and GMO are thrown around a lot these days and there are definitely two sides to the story on whether it’s ok for us to consume. As for me, I’m going with the idea that a seed that has been turned into a pesticide to kill what eats it is going to grow into a food that still maintains those pesticidal properties and is probably not something I want to eat.

So what can you do to avoid GMOs?

Here are some quick tips for those of you trying to avoid GE/GMO foods followed by some helpful tips on how to spot GM foods since labeling of them isn’t required by law. Remember, in addition to sourcing your own foods, farmers markets are a great resource for avoiding GM foods.

Buy food labeled 100% organic. The US and Canadian governments do not allow manufacturers to label something 100% organic if that food has been genetically modified or been fed genetically modified feed. Note that just because something says “organic” on it does not mean that it does not contain GMs. In fact, it can still contain up to 30% GMs, so be sure the labels say 100% organic. Remember this applies to eggs, as well. Eggs labeled “free-range”, “natural”, or “cage-free” are not necessarily GE-free; look for eggs to be 100% organic.

More than half of all GM foods are produced in the US and most of it comes from large, industrial farms. By shopping at farmers’ markets, signing up for a subscription from a local Community Supported Agriculture (CSA) farm, or patronizing a local co-op, you may be able to avoid GM products and possibly save money at the same time. Here in Austin there rare several small farms offering grains and meat directly to customers, in addition to the usual fare (vegetables, fruit, herbs).

Tip 2: Avoid the DIRTY DOZEN™. These are the top commonly genetically modified foods!

Tip 3: Focus on The Clean Fifteen™

Tip 4: Be diligent and read labels. All the time.

Our reality is every trip to the grocery store is at least 30 minutes longer than we’d like because we spend time reading every label. Every damn label.

Here are some of the other common GMO foods to watch for. Again, be diligent and shop for the organic versions of these guys as much as humanly possible.

Soybeans – A gene is taken from bacteria (Agrobacterium sp. strain CP4) and inserted into soybeans to make them more resistant to herbicides.
Corn – There are two main varieties of GE corn. One has a Gene from the soil bacterium Bacillus thuringiensis inserted to produce the Bt toxin, which poisons Lepidoteran (moths and butterflies) pests. Present in high fructose corn syrup and glucose/fructose which is prevalent in a wide variety of foods in America (though you won’t find these preservatives in their European versions).
Rapeseed/Canola – Gene added/transferred to make the crop more resistant to herbicide.
Sugar beets – Gene added/transferred to make the crop more resistant to Monsanto’s Roundup herbicide.
Rice – Genetically modified to resist herbicides; not currently available for human consumption, but trace amounts of one GM long-grained variety (LLRICE601) may have entered the food supply in the USA and Europe. More recently, golden rice, a different strain of rice has been engineered to produce significantly higher levels of beta carotene, which the body uses to produce vitamin A. Golden rice is still undergoing testing to determine if it is safe for human consumption.[3]
Cotton – engineered to produce Bt toxin. The seeds are pressed into cottonseed oil, which is a common ingredient in vegetable oil and margarine.
Dairy – Cows injected with GE hormone rBGH/rBST; possibly fed GM grains and hay.
Aspartame/AminoSweet – Addictive and dangerous artificial sweetener commonly found in chewing gum and “diet” beverages. A building block of aspartame, the amino acid phenylalanine, is usually manufactured with the aid of genetically modified E. coli bacteria. This process has been used industrially in the US for many years.

Purchase beef that is 100% grass-fed. Most cattle in the U.S. are grass-fed, but spend the last portion of their lives in feedlots where they may be given GM corn, the purpose of which is to increase intramuscular fat and marbling. If you’re looking to stay away from GMOs, make sure the cattle were 100% grass-fed or pasture-fed (sometimes referred to as grass-finished or pasture-finished).

Monsanto is the biggest culprit in supplying GM seeds to farmers, and making sure that they continue to buy their seeds thanks to constant pressure form their lawyers.

For years,  Monsanto has provoked outrage among its critics for suing farmers who save and replant seeds, such as soybeans and canola, from the company’s patented Roundup Ready crops. Some of that outrage is based on a decade-old case in Canada, in which a court ruled that a farmer, Percy Schmeiser, violated Monsanto’s patents by planting canola that he “knew or ought to have known” contained Monsanto’s Roundup Ready gene. Schmeiser argued that he didn’t want the gene in his fields, and that it had become incorporated into his canola via wind-blown pollen.

Yes, the wind (and probably birds) carried seeds onto his farm from a nearby farm using Monsanto’s seeds, and Schmeiser now has to buy new seedlings from Monsanto and plant a new crop of GMO seedlings. Every year.