Are organic foods worth the higher price tags?

Posted by: Jennifer Mansfield Categories: Blog posts Daily Posts
Comments Off on Are organic foods worth the higher price tags?

Recently there’s been some media specualtion about whether Organic foods are actually better for us than Non Organic foods.

According to the New York Times, scientists at Stanford Research have combed through 40 years of research comparing Organic vs. non Organic foods, and found that those labeled Organic have the same nutritional value as their non Organic counterparts.  I’d love to know how many hundreds of thousands of dollars were spent on this research study to determine that an organic orange has the same nutritional value as a non Organic orange.

While I’m not a Stanford research scientist, I know enough to know that an orange is an orange is an orange. Right? So to say that we held a study to determine whether nutritional value content differs among fruits and veggies based on pesticide use (non Organic farming) is a bit ridiculous.  It seems the better use of research funds is to explore the damage we are enduring from the rampant use of pesticides in our foods, and the effects of genetically modified organisms which are found in most of our processed foods here in America, as well as in the veggies and legumes on our dinner tables. And unless we raise enough fuss to fight it, it seems like we are heading down the road of further Genetically Modified foods, including fruits such as apples and oranges.

So why are Organic foods so expensive?

Many of you may not be aware that the government offers taxpayer-funded resources called subsidies to the farmers using genetically engineered seeds and who are saturating crops with insecticides and weed killers, while charging the organic farmers fees to prove that their crops are safe. As Robin O’Brien points out, that’s like being charged to wear your seatbelt.

Robin goes on to point out that while conventional food production allows for the addition of cheap, synthetic and often controversial ingredients that have been disallowed, banned or never permitted for use in developed countries around the world, organic food carries the burden of having to prove that its products are safe — products produced without the use of added non-food ingredients that other countries have found controversial or removed from their food supply.
In other words, it’s an un-level playing field right now, and we have to ask ourselves if given the choice, would we rather eat food hopped up on growth hormones, antibiotics and chemical pesticides? So again, the question of the value of Organic foods vs non Organic foods for me has never been whether an Organic bunch of kale is packed with more nutritional value than it’s non Organic counterpart. But rather, am I improving my health by avoiding GM foods, pesticides, antibiotics, growth hormones and more. As well as avoiding pesticides and hormones, I also value the idea that Organic foods are providing less of an impact on the environment thanks to their natural growth process which doesn’t taint the soil with harmful hormones, antibiotics and pesticides. And by shopping local Organic farms, you are further increasing the value of your spend.  Simply, if you spend your money on (local when possible) Organic foods, you are helping to support a small, but growing, number of farmers who are committed to fighting to bring us healthy, natural, untainted foods which are free of harmful chemicals.

And this fight has been enduring since 1990, when the Organic Foods Production Act (OFPA), as part of the 1990 Farm Bill, was passed, and established a set of standards for Organic food handling. These new standards include a national list of approved synthetic and prohibited non-synthetic substances for organic production, which means that organically produced foods also must be produced without the use of: 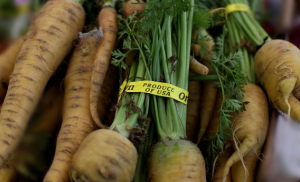 Here are some key differences between conventional farming and organic farming:

So what can you do to protect your family?

Not all products go through the cost of being labeled Certified Organic, so much like we do to avoid food allergens, it takes a bit of reading labels to ensure you are eating Organic foods when possible. Look for milk labeled “RbGH-free” or for products without high fructose corn syrup or artificial colors. A growing number of companies, from Kraft to Nestle, are producing them, and if you can shop at stores like Sprouts, Whole Foods, and other fresh market style stores, you’re more likely to find Organic foods labeled for ease of shopping.
While the list below is certainly not complete, it’s a good start for searching out products which are certified Organic; and while I agree the high cost of Organic foods can be annoying at times, I gladly pay a little more for peace of mind.