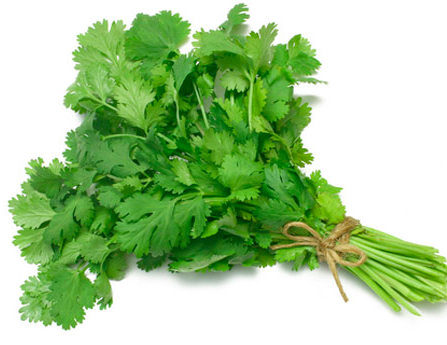 I love Cilantro – we happen to use it often as it’s a wonderful anti-inflammatory and adds a tasty kick to asian and latin inspired recipes. Read on for 5 tips for using Cilantro as submitted by Mark Lynch, a guest writer for Culinary Arts Schools.

Tasty Use One: Roots of Cilantro Used in Cooking

The roots of cilantro are intensely flavored. Roots of the cilantro herb are often used in Thai, Indian and Asian recipes. It is an ingredient in curry paste, which is popular in Indian cooking.

Tasty Use Two: Seeds of Cilantro Used in Cooking

Cilantro seeds, have a citrus fruit flavor similar to oranges or lemons. It also has a spicy, nutty or warm taste. A large seed variety of cilantro is grown in the warm climates of Australia, India and Morocco. The large seeds are ground, to create a powder and essential oil. This ground spice is used in Indian curries, as a flavoring and thickener. Roasted cilantro seeds are eaten as a snack.

Tasty Use Three: Leaves of Cilantro Used in Cooking

Cilantro leaves have a flavor very different, from their seeds. Leaves must be used quickly, after being removed from the plant. In Mexico, cilantro leaves are added to guacamole and salsa. The leaves are chopped, and sprinkled on Indian food. Cilantro leaves are popular in salads, in Russia. It is commonly used in Mediterranean, African, Portuguese and Scandinavian recipes.

Tasty Use Four: Cilantro as a Medicine

Cilantro is often used as medicine. Studies have found, that cilantro reduces harmful levels of triglycerides and cholesterol. In addition, it increases the levels of good lipoproteins. All parts of cilantro herb, have antioxidants. Antioxidants, are good for health and also help prevent food spoilage. Cilantro has antibacterial, digestive and diuretic properties, and is used in folk medicine.

There are unusual uses for cilantro. In South Africa and Germany, it is used to make sausage. South African sausage is called, boerewors. Sausage is created from various minced meats, spices and herbs. Boerewors is often imported to other countries, and sold in specialty food stores. In addition, cilantro is used to flavor pickled vegetables in Germany. In Russia, cilantro seeds are often used in rye bread recipes. Belgian beer brewers often use cilantro seeds, in combination with orange-peel, to add a fruity flavor to the beer.

2 comments on “5 Tasty Uses For Cilantro”

2 Pings/Trackbacks for "5 Tasty Uses For Cilantro"